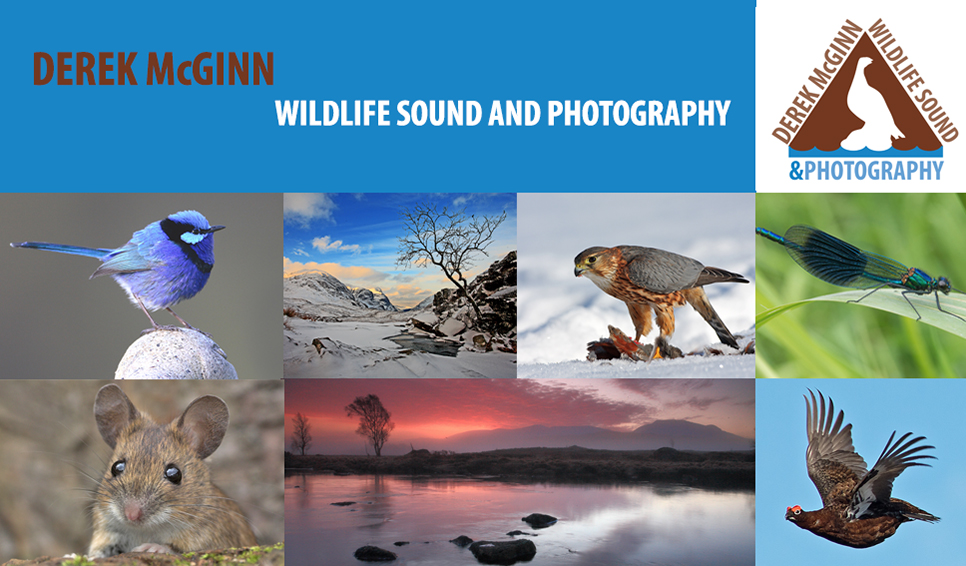 The way this page works is that the most recently added images are usually right at the bottom.

It is some time since I updated the website, indeed maybe two years!!

I have taken out a lot of material and kept the Western Australian images as I have not been able to return in 2020 and may not be able to do so in 2021 thanks to Covid-19.

Today April 10th 2021 I have uploaded a mixture of local images from the southern shore of the Moray Firth in northern Scotland. 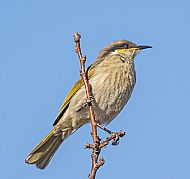 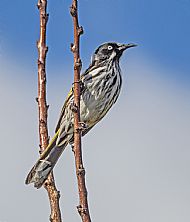 Red Wattle Bird
The largest of the local honeyeaters this is an aggressive defender of its territory and will even attack people and their dogs in season.

Australian Magpie
This is a well know species, during the spring, attacking anything it chooses. So much so that notices are placed in public spaces warning people that they must beware it is "Magpie season" It has been known to blind people as result of pecking them in the eye!!

Corrella
A common species in towns where it may roost in hundreds. 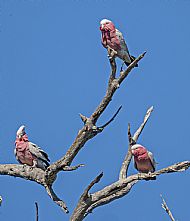 Galah
There very colourful birds are common in towns.

Laughing Lookaburra
One of two species of Kookaburra in Australia but not native to Western Australia to where it was introduced from the eastin the early days of colonisation.

Sooty or Black Oystercatcher
A wading species to be found around estuaries and coasts.

Silver Gulls
The most common gull to be seen in the SW.

Pacific Gull
Arguably the biggest gull in the world and not uncommon around the coast.

Glossby Ibis
Not uncommon in spring around some lakes.

Black Swan
After which the Swan River is named. 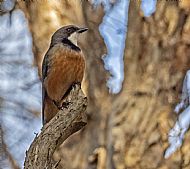 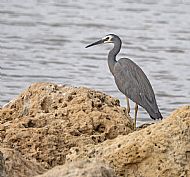 White Faced Heron
A dainty inhabitant of shore and lakeside. 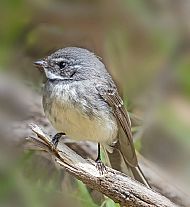 Grey Fantail
These little birds often appear to seek you out when you enter their territory.They are well named from their habit of fanning out their tail feathers.

Laughing Dove
These little doves are not uncommon.

Thornbill species
I am guessing when I say it is probably the Western Thornbill. These tiny birds seem equivalent to northern hemisphere phylloscopus warblers (Acanthiza is the genus)

Yellow Plumed Honeyeater
A bird I associate with Wandoo woodland.

Willie Wagtail
Equivalent to out northern bird they actually wag their tails rather than bobbing them. 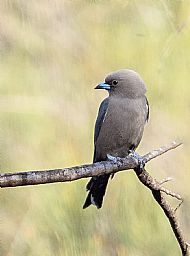 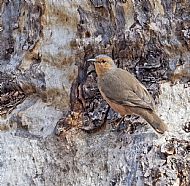 The Coalseam River gorge
A find of coal in the early days was never extracted because of the low quality of the coal.

See if you can spot the two Western Grey Kangaroos.

Everlastings
In places like Coalseam the ground is carpetted in various small flowers in Spring if winter rains have been good. 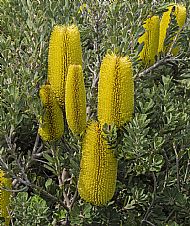 Banksia species
This was flowering in early September on the south coast near Bremer Bay.

Royal Hakea
This striking plant was growing in the Fitzgerald River National Park right down on the south coast. 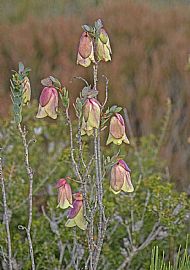 Qualuup Bells
This plant grows in the Park and is named after an early settlement homestead where we stayed.

Western Grey Kangaroo
This female was carrying a joey in her pouch.

From the Summit of West Mount Darren
The Fitzgerald Nat. Park is overlooked by a few small hills not a common feature in Western Australia's SW. It provides very good view of the park looking towards Bremer Bay and the Southern Ocean.

Trigelow Bay
One of many south coast by where Southern Right Whales, amongst others, come to have their young

Fitzgerald River National Park
This huge area extends as far as the eye can see in the evening light. 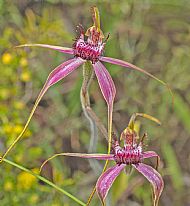 Spider Orchdis
Of the thousands of plant species to be found in WA the spider Orchids have become a fascination. I cannot tell one from another but they have a particular structure and relationship with fungi and insects which is quite amazing. They belong to the genus Caladenia.
I have not named most of them . 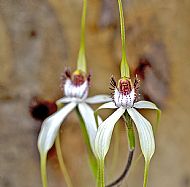 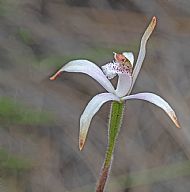 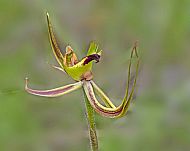 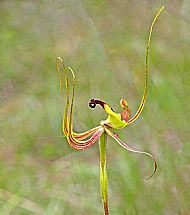 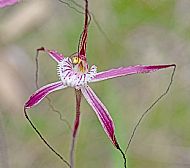 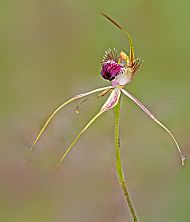 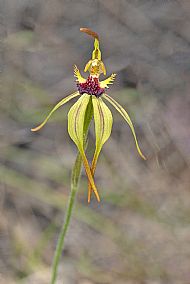 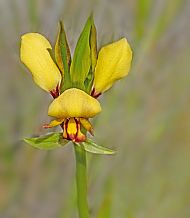 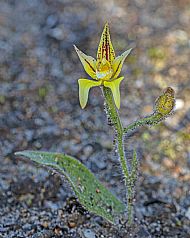 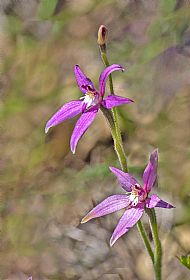 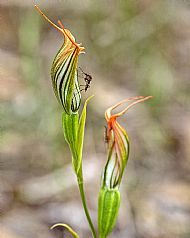 Jug Orchid
I think that is the name but could be wrong. I liked the mosquito but they were pretty ferocious in some locations. 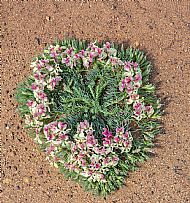 Wreath Lesuchenaultia
This was a plant I had wanted to see for a number of years.
Ironic I should find in after my wife passed away. Usually circular this one was heart shaped!! RIP

Bow Fiddle Rock
This often-photographed landmark along the southern Moray coast is near the village of Findochty.

Black Guilliemot
I found the first sign that these attractive little seabirds mght be breeding near Portsoy back in the 70s!

Kittiwakes
These dainty gulls have seen their population number much reduced over the last number of years.

Fulmars
These seabirds are related to the albatrosses of the southern hemisphere. 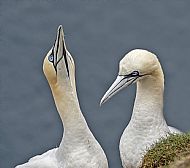 Gannets
These are the largest of our breeding seabirds. 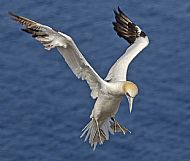 Redshank
AWay from the seabird cliffs the Moray firth os also a great plce to watch shorebirds, or waders. The Redshank is just one ofmany such species that visit the shores.

Curlew
With its long downward curved beak it cann be easily indentified along the Moray coast. 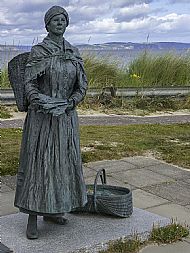 Fisherwife
This beautiful sculpture stands at the harbour of the little coastal town of Nairn. All the small towns along the Moray coast were once the focus of the fishing industry, especially herring. Now virtually all host leisure craft rather than fishing boats.

I spent a number of weeks in Western Australia which I have visited several times over the last 15 years or so.

Although I have photographed much of the flora and fauna there it is so vast that a permanent residence would be needed to see and photograph it all!

The SWcorner of the state is one of the World's Biodiversity Hotspots but relatively few people, even in Australia, are aware of the fantastic wildlife they have! The reasons for this are several but include its geological history with undisturbed millions of years without either glacial or volcanic activity hence leaching of the soils by preciptation rendering them extremely nutrient poor. This has given rise to a highly adapted flora and hence all the fauna that is ecologically related to that base.

In presenting some of the images made during this visit I have named only a few of the subjects photographed. As there are over 10 thousand differnt species of flowering plant alone it would be impossible for a visitor to begin to remember common names,let alone botanical names. For those that wish to so do I suggest the internet is the best way forward.